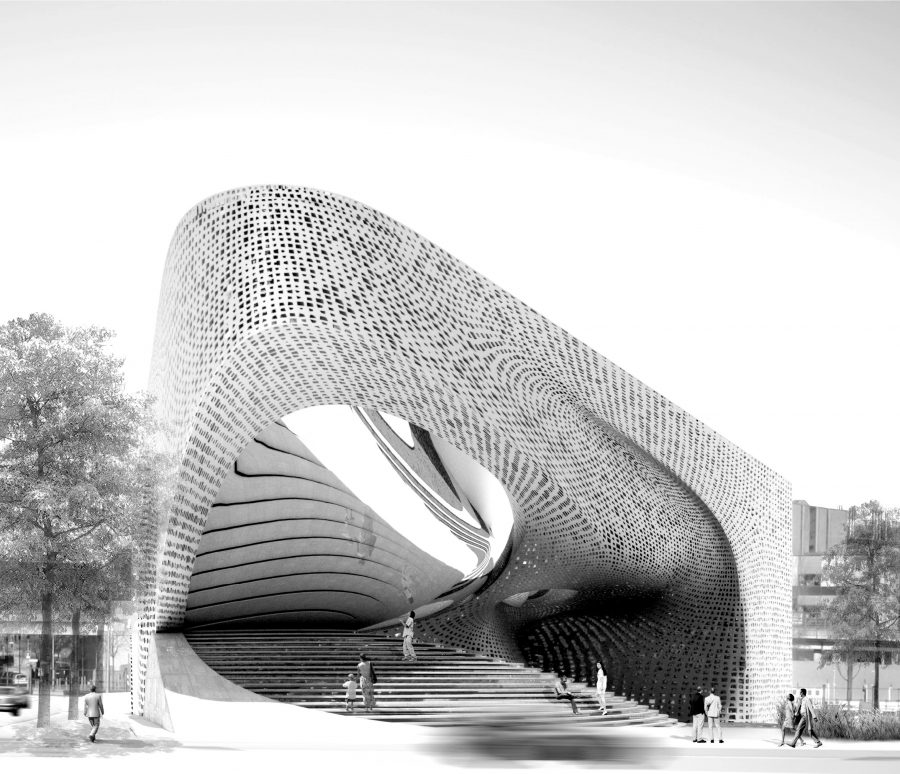 The exhibition titled ‘cut ‘n’ paste: From architectural assemblage to collage city‘ at the museum of modern art in new york city showcased canonical drawings ranging from mies van der rohe’s works to colin rowe’s, Fred Koetter and richard hamilton’s collages. the curatorial concept by pedro gadanho consisted in presenting contemporary architectural renderings projected onto a curtain through which one entered the main exhibition space. the renderings of our ‘house of the Future’ competition were selected to be presented on this curtain, alongside other renderings of contemporary architecture.

The ‘house of the Future’ itself can be described as follows: The proposal for the “House of The Future / Haus der Zukunft” in Berlin responds to Berlin’s strict urban context: the concept of the “urban block” is touched upon and developed further. The building is partially lifted off the ground, and takes up the general building height of common Berlin housing. The ground floor level is characterized by large open spaces allowing for direct and dynamic circulation. The ground floor area of the building acts as a buffer zone between the neighboring hospital, the harbor and the river Spree. The landscaping and shaped pathways offer a manifold experience of the green zone, which is an integral part of the building’s appearance. The outdoor areas invite people to stay – a small open-air stage offers additional possibilities for spatial programming.

The fluid ground floor concept takes users into the open and dynamic spaces of the building’s inside. The urban block features three-dimensional cuts on the side facing the park, which creates a contemporary, clear structure, blurring the boundaries between exterior and interior. The cuts draw the user into the interior of the building, both to revive the city space and to create naturally emerging entrance situations.

The ground floor is divided into three regions: First the lobby providing the main entrance, orientated towards the Alexanderufer street, from where all areas of the building can be accessed. Second the café which is interwoven with the park space and third the staff and delivery zone towards the busy Margarete-Steffin Street. Upon entering the lobby the spatial program opens up in a natural way: the building-high atrium space provides clarity, visual connections and guidance. It allows for reaching the floor above, where the event area, a special exhibition and the internal office area are located. The top floor houses the main show, the gallery spaces and theme islands. Here, an additional lighting through skylights in the ceiling area is provided. The floor plan provides flexible spaces for different types of use. The perforation of the wall creates vistas and offers a fantastic view over the city.

The facade of the building consists of a metal skin, which gives the building’s form a homogeneous appearance. The spaces within the wall are filled with glass and solar modules, which feed the household energy system – a link in a regional smart grid system is possible, which is a urban energy storage offering the possibility to deliver and to store on the fly. Therewith the HdZ acts as didactic interface for a futuristic smart grid technology. The spherical shaped bottom side of the building consists of a fully mirrored surface to lead bright daylight into the covered parts of the open ground floor. Exposed to the harsh weather conditions on the river, the metal facade will develop a fascinating patina over time.